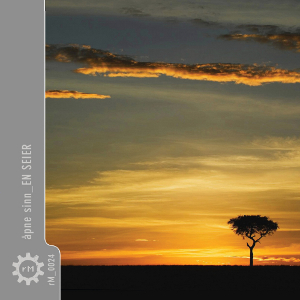 ‘en seier’ – from the Norwegian meaning “one victory”, this second album holds a much more personal and profound place in my heart than it’s predecessor, ‘espiritista’.  The choice of the album’s title is two-fold.  Firstly, it refers to the release of ‘espiritista’ in January of 2011.  I had given up the thought of one day creating music that others might hear many, many years ago.  Coming to know many of the ambient musicians that inspire me – two of whom are featured on this new release – showed me that I could still chase that dream.  ‘espiritista’, while somewhat less close to my heart than ‘en seier’ remains one of the great milestones in my life, as it marks the completion of that dream.

Mostly though, I chose ‘en seier’ as the title for this release because the phrase perfectly encapsulates my current philosophy on life.  In April of 2006 at the age of 38, I suffered what I off-handedly refer to as a mild heart-attack.  22 years of smoking cigarettes, lousy diet and no exercise caught up with me in a big way and fundamentally shifted my perception.  Today, nothing is taken for granted, there are no “givens” and every day that I wake up is One Victory.

The first track written for ‘en seier’, ‘son of low birth’ was the direct result of spending a great deal of time listening to the album “One” by the Yuval Ron Ensemble.  I have always felt a deep connection to the music of the middle-east, and immediately fell in love with the unique way that talented Oud-player Yuval Ron brought together musicians from opposite sides of the vast cultural divides in that region to create something unique and remarkable.  I do not attempt to recreate his sound, or to mimic his music with this track.  This was merely a musical response to the feelings the Ensemble’s art produced in me.  Instrumentation includes Spectronics’ “Omnisphere”, NI’s ‘Absynth’ and several edited and/or time-stretched ACID loops.

The first of two collaborative tracks with veteran ambient artist Steve Brand.  Through our years working together in the industry (first on the AtmoWorks label and most recently on Relaxed Machinery), we have struck up a unique and often-times surprising friendship, especially for two people who until late 2010 had never met in person.  Steve’s musical vision and dedication to his craft has been a constant source of inspiration for me during these past several years, so when he sent me some base sounds he had been working on “to see what I could do with them”, I jumped in with both feet.  ‘Unconquered’, actually the second collaborative piece we completed came together almost effortlessly.  Much of the music you hear throughout the piece (especially in the first 5 minutes) is Steve’s base file ‘No More Conquering Here’, which I generally noodled around.  The transition into the second phase of the piece at 5.08 begins what has become one of my favorite passages of music anywhere.  In that last 6 minutes of music I really believe that our two very different styles came together as something new and wonderful.

In his pre-release review of ‘en seier’, John Shanahan (Hypnagogue Reviews) wrote that “this piece has a very personal feel, like there’s an unspoken dedication being made.”  ‘His Great Heart’ is indeed a very personal piece of music, written in a single take very late one evening in late May of 2011.  Earlier that month, my wife Eileen and I lost our dog Shiva, a 14-pound Pomeranian with enough attitude for a Great Dane, at the age of 16.  He passed away in his sleep, and we still miss him every day.  He was the inspiration for BeachDog Music, and remains just about the coolest dog I’ve ever known.  The piece is intended to capture his spirit, his charm and the immense hole his passing has left behind.

A second collaborative effort, this time with English ambient composer and sound engineer peter james.  My relationship with peter extends back several years, beginning when we were “introduced” by shared friend Dean Richards (Disturbed Earth). “What Rough Beast” marks the first time we have ever attempted to work together, and I couldn’t be happier with the result.  peter sent me the growling, elemental drone that ties the finished piece together, with myself adding sounds that I felt complimented and opposed it.  The very breathy pad that comes and goes was only added after I had titled the piece, which I typically won’t do until a specifc track is completed.  The title itself is an excerpt from the epic W. B. Yeats poem “The Second Coming”, and came about in a very unusual way.  The bells in the track made me think of a mule train.  A mule train led to a donkey, which led to people riding donkeys which led to Mary and Joseph.  The rest is, as they say, history.

The title track for the release, ‘en seier’ came about more by accident than by design.  I had decided on the album’s title long before the first song was written (about a week after ‘espiritista’ was released), but had not started on recording the track by the time the other seven were completed.  My intention when sitting down that October evening was to start work on material for the next album.  I can never seem to “target-write”; where you deliberately try to write for a specific result.  More often than not, I’ll record an entire track and only start thinking of titles once I’ve listened through it about 10 times and decided what it says to me.  The track that would become ‘en seier’ sort of materialized over a three-hour span of noodling around (I do that a lot) with a patch I really liked in Omnisphere and allowing echoes to interplay and overlap.  I was happy with the track, and set it aside for future review and use.  A month or so later, closer to release of ‘en seier’ and still with no title track having materialized from my sporadic studio sessions, I started to revisit works in progress to see if anything would fit the album.  The track that made the album was the only one of ten that I felt would work in the album flow.  At that point, I was considering either changing the album title or leaving it and just not having a title track.  I decided to go with call this piece ‘en seier’ in the end because it fit the theme of the album.  ‘En seier’ translates from the Norwegian as “one victory”, and this was the one piece among many that I chose to fill the slot.  It sounds nothing like what I had originally intended for the title track of this album, but I’ve come to feel it fits more perfectly for that disparity.

I’ve a difficult time referring to this track as a “song”, since to me it’s more of an internal soundtrack to an imagined video.  I’d just watched the original Star Trek movie after not seeing it in many years, and was powerfully fascinated by the idea of communications satellites on their endless and silent journey once they exceed the range of their transmitters.  This track is the music I heard in my head as I pictured one such satellite, passing through deep space and “seeing” things that no human may ever see.  Picture a fixed point in space and watching Voyager slowly roll by, and you’re seeing what I saw.

The second collaboration with Steve Brand on the album, this track started out it’s life intended for compilation album that got put on hold.  Once again, I was working with a base file Steve sent me – the gorgeous “ah” chorus you hear throughout – but this time wanted to bring some rhythmic elements to the table.  The piece really lent itself to a slow, organic buildup and I think perfectly juxtaposes our two very different styles.  After building the track around Steve’s base file, I sent it back to him.  He added the high, Uilleann pipe-esque lead that drives the track in the latter half, and I think the result speaks for itself.  The title came almost as an afterthought (it was originally called “memory_loop”).  I was listening to the track while looking at the cover art for the album and got a palpable sense of running across those flatlands at sunset with this as the soundtrack.  The title change came easily after that.

My favorite track on the album, ‘deep breath out’ is for me self-explanatory.   Recorded in one take with one voice, it stands as the sole instance in my musical “career” where I just stopped thinking and let the music go where it wanted to go.  Several years ago, I’d had a conversation with Steve Brand where I told him that I couldn’t write the quiet, longer ambient that I so love and wanted so badly to create.  Steve’s advice at that time changed everything, though I wouldn’t realize it until much later.  He told me simply to spend more time in silence, a prospect I didn’t hold out much hope for.  My “real life” is hectic and noisy, and music has always been my greatest solace, so the idea of spending time without sound – without music – just didn’t compute.  It wasn’t until the evening when ‘deep breath out’ was born that I understood the deeper meaning of Steve’s advice, and that there are many types of silence.  This track evolved out of that rarest kind of silence, where the brain switches off and guidance comes solely on instinct. 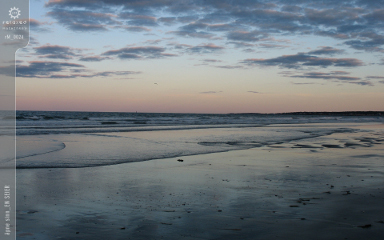