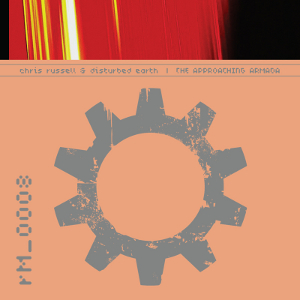 “The Approaching Armada” is the first album I recorded in Australia after relocating from the U.S. in 2008. The ominous title says it all, and was my mood in those harrowing days of my then-unknown future in Australia.

Chris’ enigmatic soft synth loops were love at first listen to me… their sensitive, sonic quality had a feeling that I knew would lend them to my analog “reel to reel” looping, sound design techniques used in previous Disturbed Earth recordings. This is truly an album of giving the illusion of multi-layering, when in actuality it was only done in a few live takes for each track. This album was also a first for me to “not play” as such, as a musician; to be able to recreate my playing through Chris’ loops… I found this the way to go and it freed me up to produce… it really paid off!!!

So having said that, the whole concept of working with another person ushers in the whole thing of respect, communication, time, time zones (Chris in the U.S. / Dean in Australia) and the expanding of each other’s sensibilities… taking each other where we haven’t been before… stretching/confronting.

For the most part, all tracks on the album were mixed on my makeshift computer at the time… using Magix Audio Studio 11, I also used Ableton Live 7 on the track “From East To Evening” which includes manipulated vocals from my long time collaborator, kyra aka “pixyblink”.

“The Approaching Armada” is all about Chris’ electronics that have been soft soaked, the brittle remaining dark and edgy… and Disturbed Earth’s presence in the sound.