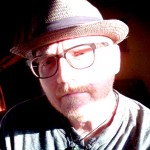 ABOUT: A lifelong artist and musician, Steve Brand originally recorded and released in the experimental realm under the name “Augur,” with more than 20 limited edition releases on various independent labels. In 2003, Steve began creating in the “ambient” genre under his own name. He describes this change in moniker and musical expression as “Part of the process of moving out of my head and more into my heart.” Since then, Brand has issued a number of self-released disks, as well as a number of solo and collaborative releases on the esteemed U.S. labels, Hypnos and AtmoWorks, the Spanish label, alteraOrbe, and the Italian label, Afe. Instruments used in Brand’s music include keyboards, field recordings, various flutes, whistles, zither, ocarina, voice, medicine drum, shakers and rattles, various bells, kalimba, prayer bowls, kora, gongs.
Along with John Koch-Northrup and Geoff Small, Brand helps run the relaxedMACHINERY label as Art Director/Designer and Ethustiastic Boat Floater.

ACTIVITIES:
– Selected tracks have been featured on Stephen Hill’s nationally syndicated radio show “Hearts of Space” on 9 occasions (October 2007 “Darkwater” edition, August 2008 “Reading the Bones” edition, July 2010 “Heatwaves” edition, and October 2010 “The Crossing” edition, May 2011 “Timescapes” edition, August 2011 “Desert Solitaire” edition, February 2012 “Supernatural” edition, July 2013 “Heatwaves” edition, January 2014 “Mystic Metals” edition).
– Music continues in rotation on SomaFM’s DroneZone, StillStream.com and Reneé Blanche’s “Night Tides” on KCUR 89.3/NPR.
– July of 2009, my AtmoWorks release, “Because We Were Once Covered In Gold,” was honored as the “Featured Album of the Month” on StillStream.com.
– In January of 2010, his Hypnos Secret Sounds release, “Children of Alcyone” was named one of Star’s Ends “Top 15” for January 2010.
– My 2010 Relaxed Machinery release, “Circular Scriptures” was one of PingThings “Top 10” for 2010.
– “Avatara,” released on Hypnos Records in April, 2010, was named as one of Stars End “Top 10” for July and August of 2011, and Galactic Travels “Top 20” for December, 2011.
– June 2011, interviewed along with Renee Blanche of Night Tides, on KCUR 89.3/NPR, “Central Standard” with host, Jubilani Lafall.
– Several releases have been reviewed and featured on podcasts by Hypnagogue Podcast/Reviews (John Shanahan).
– “Catalyst,” his June 2012 Relaxed Machinery release, was on the WVKR-FM “Secret Music Top 20” for the month of August.
– My Hypnos Secret Sounds releases, “Bridge To Nowhere” and “Children Of Alcyone,” were on Dave Butler’s “Spectral voyages” (on KRSC Kentucky) “Top 20” for April 2012.
– Interviewed by Michael Foster of Ambient Visions August 3, 2013.
– “The Great Hoop” was included Scott Raymond’s “Secret Music” Top 20 Playlist for October 2013, and “The Space Between” for January 2015. Brand’s releases, “Meltstream” (w/ Roy Mattson) and “The Space Between,” were named as two of Star’s Ends “Top 20” for September, 2014.
– Music frequently ranked #2 and #3 on “Top 30 Artists by Listeners” and “Top 30 Artists by Spin” on the Drone Zone/SomaFM charts.
– Steve’s music can be found on CDBaby, Bandcamp, iTunes, Napster, Amazon, eMusic, etc.

REVIEWS: Steve’s music has been described as “ambient,” “tribal,” “ritualistic,” “a direct link to our ancient, and arcane ancestry,” “…not mere music, but an almost shamanic attempt at deconstructing our interpretation of reality, by connecting us to an anti-technological, primal psyche,” and “Brand has tapped into a sound or feeling that’s at the core of all things, a universal essence.” Hypnos Records says of Steve, “(he has)…quickly established himself as one of the more interesting and distinctive artists working in ambient music…”

PERSONAL BACKGROUND: “For me, music is more than just notes, chords, arrangements, applied theory or an object for sale. From the earliest times, musical been our attempt to mimic and honor our surroundings. Music has also been our means of organizing, communicating and understanding our history, experiences, feelings, emotions and memories. Intuitively, on some level, we have always understood the power of music to release us from the tyranny of the commonplace, from the constraints of a materialistic and overly rational world, as well as it’s potential to create new understanding, insight, expression and ways of being. Music can unlock ancient, even timeless memories, and aid us in redefining our personal and collective present and future. My intention is to make expansive, adventurous, mysterious, uncompromising music that honors these principles and share it with as many others as possible.” – Steve Brand